The Lincoln Artists' Guild,  a local art group that I am a member of, is doing a themed meeting where we each bring a painting we made, where we copied a master's painting.  As my grandfather always used to sing, "Mona Lisa," to me, I have a special fondness for the painting that the song is about, and have been attempting to copy Da Vinci's masterpiece.  It has not been easy.

I didn't think to take too many pictures until I was well under way, but here is my progress so far:


Continuing to slowly work more on this painting and getting frustrated.  I keep messing with her face trying to get the shading right, but it's turning into a mess.  I think I've made her face now look like she has a five o'clock shadow...I find painting to be so much more difficult than drawing.  There is so much more control in drawing versus painting.  I'm not ready to throw the towel in yet, but it's starting to lose it's fun factor. :(


My twelve year old daughter (jokingly) said it looks like it should be "Mona Lisa After 20 Brownies,"...Yeah, that's about right!

Still chugging away, about to give up on her face for now, because our guild's meeting is in less than 36 hours and I need to get somewhere with the rest of the painting.


After the meeting, I was still so completely frustrated with the face that I covered her face in white paint and started over again on that part.  One month later: 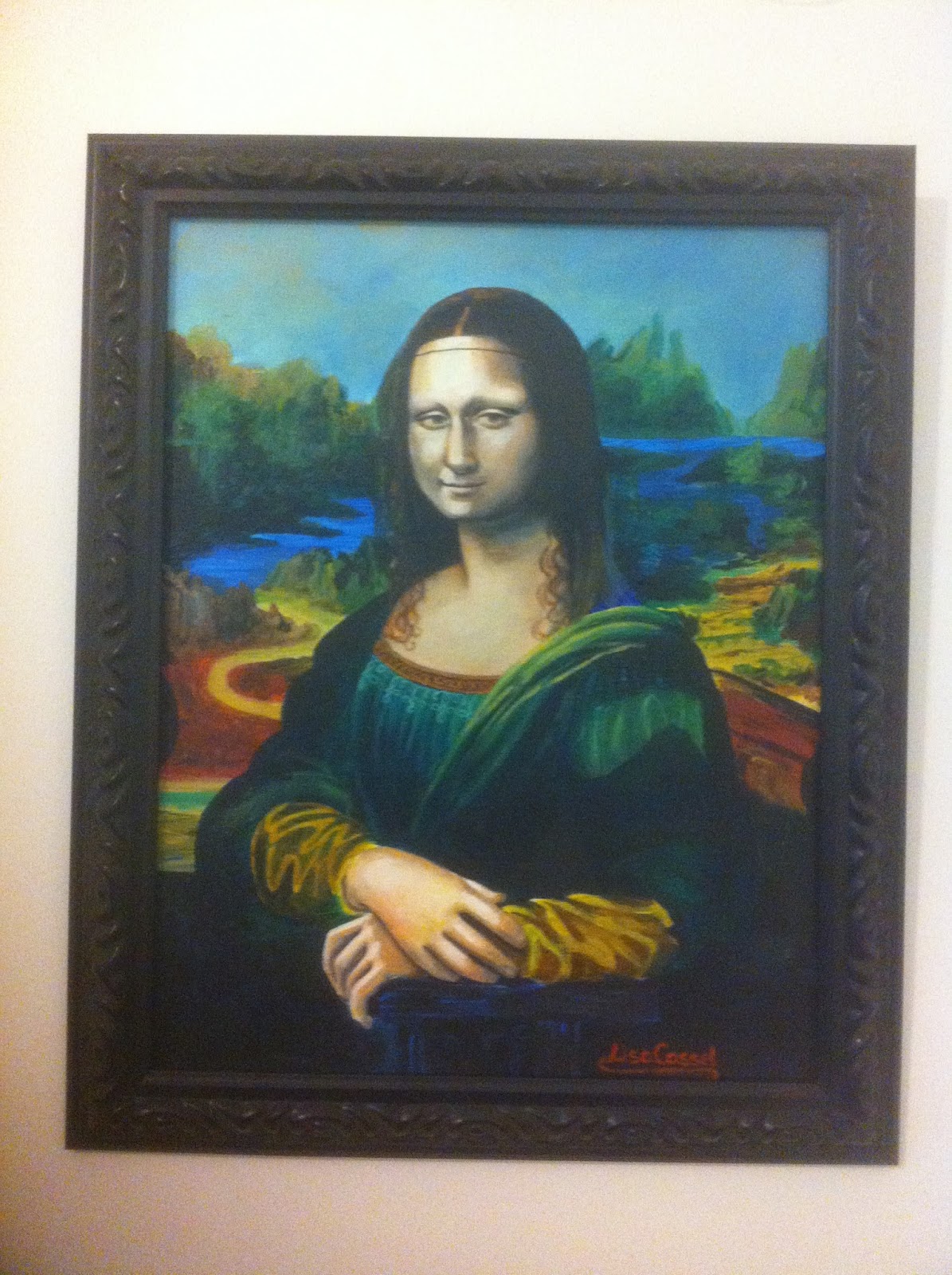 Here it is ready to show at a public library.  It's better (her face), but still not quite right.  Oh, well.  I have other projects that need working on and it's literally out of my hands,  for a while anyway.  While preparing for the guild's showing of the "Masters to Master" project at a local library, I made a little write up on the painting to hang next to my copy of it.  Apparently, it took Da Vinci about 14 years off and on to paint the "Mona Lisa" so since it took me just a little over 15 hours to paint mine, I'll say that it's not too bad at all then. And maybe if I keep working on it I'll have it just about right in another 13 years!!!

Here's my info for the show:

Leonardo da Vinci was a famous painter, inventor and scientist, among many other things, of the 15th and 16th centuries.  He was the epitome of the Renaissance Man, having a burning desire to understand everything around him and astutely studying a multitude of subjects.
One of his most famous works of art is his portrait, the “Mona Lisa.” It has been said to be “the best known, the most visited, the most written about, the most sung about, the most parodied work of art in the world.”  It was the property of kings and emperors, and has continued to capture the attention of people the world over.
Da Vinci’s “Mona Lisa” painting is one of the most famous examples of the sfumato painting technique, in which there are no harsh outlines and areas of different colors blend together.
Da Vinci painted the “Mona Lisa,” between around 1503 and 1517, first in Italy and then in France.  He worked on it off and on during that time. It was inherited after his death, by his pupil and assistant, Salai; and then purchased by the king of France, who was at the time Francis I. It was kept at the Palace of Fontainebleu, until it was given to King Louis XIV, who moved it to the Palace of Versailles.  After the French Revolution, it was moved to the Louvre, though it did spend a brief amount of time in the bedroom of Napoleon.
It was stolen in 1911. First thought to be with photographers, photographing it for marketing purposes, once the guards realized that it wasn’t, the Louvre was shut down for an entire week to aid in the investigation of the theft.
Irreplaceable, the “Mona Lisa”  was assessed for insurance at $100 million in 1962, but if adjusted for inflation using the US Consumer Price Index, it would be worth $760 million in 2012, making it one of the most valuable paintings in the world.

Posted by Cassel Creations at 6:15 PM

If you'd like to inquire about a commissioned piece or to purchase one of the pieces on my blog, or if you have other questions or comments, you can email me at:
casselcreationsart@gmail.com